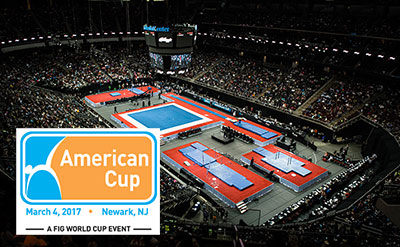 Two-time Olympian Sam Mikulak of Corona del Mar, Calif./U.S. Olympic Training Center, drew ninth position for the competitive order on floor exercise. The women begin their competition on the vault and 2016 Olympic replacement athlete Ragan Smith of Lewisville, Texas/Texas Dreams, will compete eighth. The USA will have an additional men’s and women’s athlete competing as wildcard entries, which will be announced at a later date. The men’s wildcard drew seventh position on floor exercise with the women’s wildcard scheduled to compete fifth on vault.

The complete draw order, which drops down one athlete per rotation for the starting slot, is as follows.

Mikulak is the four-time defending U.S. all-around champion and was a member of both the 2012 and 2016 U.S. Olympic Teams. In Rio, Mikulak helped the U.S. men to fifth place, while he finished seventh in the all-around and eighth in the floor exercise final. This will be his fourth appearance at the American Cup, where he won the title in 2014.

The American Cup is the USA’s most prestigious international invitational, and this is the second straight year the one-day all-around competition will be at Prudential Center. This marks only the second time since 2002 that the American Cup will be held at the same arena in consecutive years. Prudential Center has also hosted both the 2016 and 2012 Kellogg’s Tour of Gymnastics Champions.