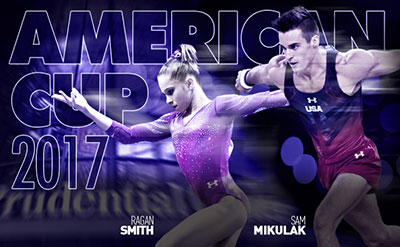 Representing 10 countries, the gymnasts who have accepted invitations are listed below by country. The USA will have an additional men’s and women’s athlete competing as wildcard entries, which will be announced at a later date. All U.S. athletes are expected to show competitive readiness prior to the event.

Kato, who won the 2016 American Cup, was a member of Japan’s 2016 Olympic Team, which won the country’s first team gold medal since 2004, and 2012 Olympic Team that won the men’s team silver. He also has four World medals (one gold, two silver and one bronze). 2015 American Cup champion Vernaiev won two medals in Rio – taking the all-around silver by less than a .100 margin and winning the gold medal on the parallel bars. He has two career parallel bars World medals (2014, gold; 2015, silver). Dauser, Derloo, and Yusof also competed at the 2016 Olympics. Oldham, who won a historic Olympic team bronze medal with Team GB in 2012, is participating in his second AT&T American Cup, having finished ninth in 2014. Sun took the bronze medal at last year’s American Cup.

On the women’s side, the four women who competed at the Rio Olympics are Black, Bui, Teramoto and Thorsdottir. Two-time Olympians Black and Teramoto finished fifth and eighth, respectively, in the all-around in Rio. At the 2015 World Championships, Thorsdottir helped the Dutch team qualify a full team to the Olympic Games for the first time and also finished eighth on the balance beam. Murakami competed at last year’s American Cup, finishing sixth in the all-around, and Bui took the bronze medal at the event in 2009. Tunney was a member of the 2012 British Olympic team.

The American Cup is the USA’s most prestigious international invitational, and this is the second straight year the one-day all-around competition will be at Prudential Center. This marks only the second time since 2002 that the American Cup will be held at the same arena in consecutive years. Prudential Center has also hosted both the 2016 and 2012 Kellogg’s Tour of Gymnastics Champions.