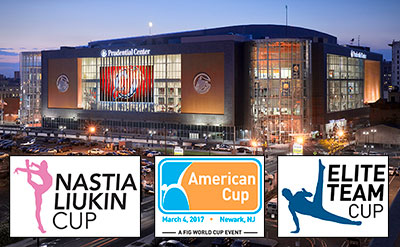 INDIANAPOLIS, Jan. 31, 2017 – Tickets for both the 2017 Nastia Liukin Cup and the Elite Team Cup at Prudential Center in Newark, N.J., go on sale Feb. 1 at 10 a.m. ET. The Nastia Liukin Cup is slated for 7 p.m. ET on March 3 and showcases many of the country’s best Junior Olympic female gymnasts. The 2017 Elite Team Cup is scheduled for 6 p.m. on March 4 and features top junior elite men from nine regions who are paired with a senior elite gymnast in a team competition. Both events are held in conjunction with the 2017 AT&T American Cup, an International Gymnastics Federation World Cup event that features some of the world’s biggest names in gymnastics, scheduled for March 4 at 11:30 a.m. ET.

Ticket pricing for both the Nastia Liukin Cup and the Elite Team Cup is the same. Tickets are $40 for reserved seating and $30 for general admission. For groups of 10+ people, tickets are half-price – $20 reserved or $15 for general admission. Groups also can purchase tickets for both events for $25 reserved or $20 general admission. All ticket prices are plus applicable fees. Tickets may be purchased through ticketmaster.com (Nastia Liukin Cup, Elite Team Cup) by phone at 800-745-3000, at all Ticketmaster outlets and at Prudential Center’s box office. For more information, go to nastialiukincup.com or usagym.org/events.

The nine senior gymnasts will be invited to compete based on the all-around results at the 2017 Winter Cup Challenge, Feb. 16-18, in Las Vegas, Nev. The senior gymnasts will be aligned with a regional squad via a draft. The lowest-ranked region based on the 2016 Elite Team Cup results will have the first pick and continue in reverse-rank order. Each region’s chairman will represent his region in the conference call draft.

The junior elite gymnasts must be between 13-18 years of age as of May 31, 2017, and will be selected from the Regional Elite Team Program. The Junior Elite gymnasts will follow the USA Gymnastics Level 10 Age Group Competition Program rules, with the senior gymnasts competing under the International Gymnastics Federation rules.

AT&T American Cup
Two-time Olympian Sam Mikulak of Newport Beach, Calif./U.S. Olympic Training Center, and 2016 Olympic replacement athlete Ragan Smith of Lewisville, Texas/Texas Dreams, have accepted invitations to represent the United States at the 2017 AT&T American Cup at Prudential Center at 11:30 a.m. on March 4. The USA will have an additional men’s and women’s athlete competing as wildcard entries, which will be announced at a later date. The field features nine gymnasts who participated in last summer’s Olympic Games in Rio de Janeiro, Brazil, including gold medalists Ryohei Kato of Japan, who is the defending men’s American Cup champion, and 2016 Olympic parallel bars champion Oleg Verniaiev of Ukraine.

Tickets are available for the AT&T American Cup, the USA’s most prestigious international invitational and part of the International Gymnastics Federation’s all-around World Cup series. Tickets may be purchased through ticketmaster.com, by phone at 800-745-3000, at all Ticketmaster outlets, as well as at Prudential Center’s box office. For group sales (10+ people) information, please call Prudential Center’s Group Sales department at 973-757-6250. For additional information, please go to americancup.com.