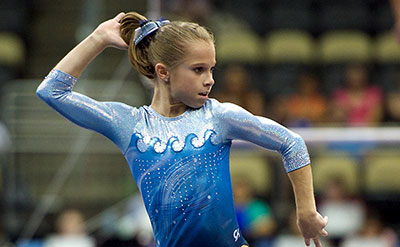 Less than six months after the U.S. women turned in their most dominating performance in gymnastics at the Olympic Games, the next quadrennium begins without the host of household names made famous from Rio (and prior).

Instead, it’s 16-year-old Ragan Smith who will lead the charge for the U.S. in the first major event since the Rio Olympics at this weekend’s AT&T American Cup at Prudential Center in Newark, N.J., the first International Gymnastics Federation all-around World Cup event of 2017.

“For me to be competing at the AT&T American Cup, that means the world really,” Smith told USA Gymnastics in an interview. “I feel like that’s where Olympic dreams come true almost. Pretty much everyone who has won the American Cup has made an Olympic team, so it means so much to me.”

Smith is right in that regard when it comes to her coach, Kim Zmeskal. Zmeskal made her American Cup debut in 1990 as a 14-year-old junior, winning the event, then repeated as champion before the 1992 Olympics, where she would help the U.S. to a team bronze in Barcelona.

“For me as a competitor at American Cup, I can still clearly remember – I was a junior – where I was standing in Karolyi’s gym when Bela pulled me aside and said that there was a spot for me at American Cup,” said Zmeskal. “Having had that experience as an athlete, it’s always been a goal of mine to help someone else get to that point. It’s been something on our radar for a long time.”

In enters Smith, who was one of the three alternates for Team USA at the Olympics, training at a site on the outskirts of Rio alongside Ashton Locklear and MyKayla Skinner as the Final Five – Simone Biles, Aly Raisman, Gabby Douglas, Laurie Hernandez and Madison Kocian – dominated the Games.

She says she feels like a “new Ragan,” and is the lone all-around gymnast that has carried over from the 2016 Olympic squad as the members of the Final Five have yet to resume training.

“I’m ready to kick butt in 2017,” she said plainly. “I wasn’t where I wanted to be (in Rio), but I still had teammates and got to train in Brazil, so that was an amazing experience for me. That experience definitely motivated me to get better and do better. If I went through that hard time, I know that this year is going to be a breeze for me.”

It wasn’t a breeze returning from Rio, however, with Smith coming home to Zmeskal’s Texas Dreams gym in the Dallas area exhausted from keeping her body ready for competition through mid-August. A bone chip was found and taken out of her ankle in October, which forced her to take some much-needed rest, Zmeskal said.

“She actually needed that downtime,” Zmeskal said. “I think that was a good thing. She’s been on fire ever since.”

With new code of points being introduced by FIG this year, Smith said she’s made some changes to her bar and beam routines but has kept her vault and floor exercise (a popular routine to the “Addams Family”) the same. She’ll make bigger changes following the AT&T American Cup. 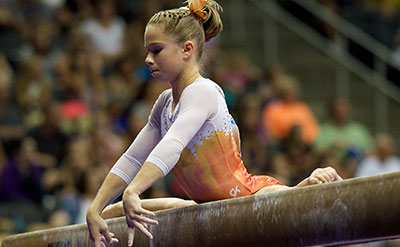 It is just Smith’s third senior international appearance and first in a World Cup, having competed at Jesolo Trophy and Pacific Rim in 2016. It’s those events that gave her a boost in the Olympic year coming out of the junior ranks, however, and Zmeskal said they’ve only continued to build off of that base.

“That momentum really carried her throughout the year,” Zmeskal said. “It was a big confidence boost for her and she carried it all the way.”

That has transitioned into 2017, where Smith has taken on more of a leadership role at her home gym and at the Karolyi Ranch for training camps under new national coordinator Valeri Liukin, the four-time Olympic medalist from 1988. She said she’s now a smarter gymnast, and one that is focused on solely herself.

“One of the biggest lessons I’ve learned in the last year is just not to be as nervous,” she said. “I feel like there’s no point in stressing about it because you can’t really do anything about it if you fall. It’s gymnastics… you’re going to make mistakes. You have to trust your body because you know what you’ve been doing in the gym.”

“The American Cup to me is stacked up next to the Olympic Trials or Nationals,” said Zmeskal. “I know what it felt like to be out there. I know what this event means to the world of gymnastics. We’re doing our very best to make sure we keep the American tradition alive.”

The U.S. has a 14-year winning streak going at the event.

With outside expectations high, internally things are rather straightforward for Smith and her American Cup approach: She wants to just be herself and do what she knows she’s capable of doing.

“I want to do what I’ve been doing in the gym,” she said. “I can’t care what’s going on on the other side of the podium.”

It’s the Olympian she’s closest with – Zmeskal – who has to work on her nerves a bit as a coach, having developed a series of habits her husband and co-coach Chris Burdette calls “stupid-stitions.”

“It’s kind of ridiculous, which I realize, but I really can’t help myself,” Zmeskal said, laughing. “I don’t know, it’s about finding a good luck penny or standing in a certain place during warm-ups. It’s all little silly things. Aimee Boorman let me wear her Team USA bracelet last year and as things went well (for Ragan), Aimee just said, ‘Keep it.’ If I’m wearing a pair of socks and we do well, I’m probably going to wear the stupid socks again.”

Lucky socks or not, Smith isn’t having any of it. And for her, that’s a good thing.

“I know that she paces around a lot but I don’t really pay attention,” she said, both she and Zmeskal laughing. “I just breathe.”