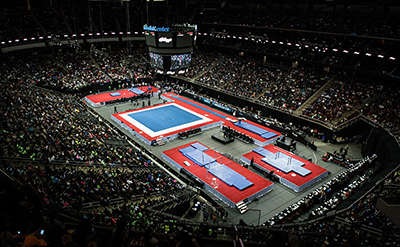 For elite gymnasts, the path to the 2020 Olympics in Tokyo kicks off at the AT&T American Cup, held at Prudential Center in Newark, N.J., this weekend.

None of the five U.S. women who won team gold at the Rio Olympics are currently for competition. Two-time Olympian Sam Mikulak was set to compete in Newark, but tore his left Achilles tendon during a floor routine at the Winter Cup Challenge and had to withdraw. So instead of more familiar faces, four up-and-coming members of Team USA get to strut their stuff.

For 16-year-old Ragan Smith, a Rio Olympic alternate, the transition from understudy to leading lady came in a flash.

“You go from being the baby, to the mama, so quickly,” Smith’s coach, 1991 World all-around champion Kim Zmeskal, said. “Ragan went from being the little one last year, her pony bobbing around and saying, ‘Where’s Aly (Raisman)? Where’s Simone (Biles)?’ to being a leader.”

“Sure, with girls like Aly and Simone, I was the one following,” Smith said. “Now, it’s kind of changed in a snap. I can’t believe it’s already here, it’s gone by so quickly.”

Another Rio Olympic alternate, Akash Modi, finds himself in a similar position. Many are looking at the 21-year-old Stanford University mechanical engineering student as one of the potential leaders of the men’s program.

“I’m trying to push USA Gymnastics to be as good as possible, and if me being here and being as good as I can, can help bring the U.S. team to the podium at the next Olympics, then I’m happy to do that,” Modi said.

There’s another wrinkle. Not only do Smith, Modi and other competitors want to stick their landings, but the time is ripe to show new skills and adjust their routines to International Gymnastics Federation’s new code of points. Rhonda Faehn, senior vice president of USA Gymnastics’ women’s program, thinks American Cup is a great opportunity to lay the groundwork for future world and Olympic competitions.

“Always the year after the Olympics is a transition year,” Faehn said. “We have a new code of points we are working with and this is a chance for athletes to try out new routines and new combinations. It’s a process of fine tuning to see what’s going to work and what isn’t.”

Smith, who’s recovering from the removal of a bone chip in her ankle in October, hasn’t had time to perfect all of the moves she and Zmeskal plan to unveil later this season.

“And the construction of the bar routine is ready for new skills,” Zmeskal quickly added. “The bar stuff is rearranged in a way that can connect things that will give her a higher start value. It’s all about building the routines. We want her to come here, take advantage of it and shine. She needs a chunk of time after American Cup to add back the beam difficulty and some combinations.”

Smith’s teammate, 15-year-old Riley McCusker, makes her senior international debut and will show a Yurchenko double full vault for the first time. She’s also upgraded her beam and bar routines by almost a point each.

The U.S. women have won the title at the American Cup every year since 2002. (The 2005 American Cup featured an apparatus finals format where the U.S. women claimed gold medals on three of the four events.) Smith is a favorite to win on Saturday, but she’ll have to fight off tough competition from Amy Tinkler of Great Britain, bronze medalist on floor in Rio, and Japan’s Asuka Teramoto, who was eighth in Rio’s all-around.

Faehn is optimistic about Smith’s chances.

“Ragan has the experience, she is the one on our national team who has returned and is stepping up,” Faehn said. “She competed at Olympic trials last year, did a fabulous job and was our replacement athlete and trained over in Rio. She’s able to take those experiences wither and transition to this season.”

She also thinks the women’s program is in good hands, even if none of the “Final Five” decide to return to elite competition.

“Valeri (Liukin) as the new team coordinator is incredibly strong and positive,” Faehn said. “I feel like we’re in a strong place. We have a very young group of athletes, and that’s what’s exciting and promising. Our juniors, as well, are heading out internationally after this competition, and they’ll be seniors next season.”

On the men’s side, some are looking forward to seeing flashier, more high-flying tricks this Olympic cycle.

“You might see some guys doing five releases, which hasn’t happened in a decade’s time, so it’s exciting,” British gymnast and 2012 Olympic team bronze medalist Sam Oldham, who will compete on Saturday, said. “I think the new Code of Points pushes gymnasts to the big tricks, the things the crowd really enjoys to watch: the flares on pommel horse, the big release and catches on high bar, the big tricks on the rings and the floor. Gradually over the next few years, those will become more the focal points of routines.”

For his part, Modi plans to show off some new moves on Saturday.

“The competition is intense, for sure. We really turn it on when it’s time to compete,” he said. “I definitely upgraded from a bunch of events last season. I’ve competed these routines at the Winter Cup and at a few NCAA meets, so I have some competitions under my belt, but there are definitely a bunch of upgrades.”

Yul Moldauer, the 19-year-old University of Oklahoma standout who defeated Modi at Winter Cup two weeks ago, is also stepping things up at the AT&T American Cup.

“On each event, there are a couple of new skills,” Moldauer, the 2016 NCAA all-around champion, said. “Floor, I’ve added two different passes, because the connections are different. The pommel horse, I added flares, and on rings, I added another strength skill. This year, I’m approaching it to hit perfect routines. That’s my goal.”

Like his longtime friend and rival Modi, Moldauer is enthused about the prospect of leading Team USA.

“I remember when I was younger watching other guys and now that I’m at this event, it’s going by so fast,” he said. “It makes you realize you can do it, just work hard and it does pay off. It’s a responsibility, because we’re going to be leaders. Hopefully we can help motivate younger guys to do their best, too.”

“I’m very happy to be back competing at this event, because I couldn’t come last year,” Verniaiev said through an interpreter. “I definitely plan on leading Ukraine at the next Olympics. That’s why I’m here.”

Asked whether he will unveil any new moves, Verniaiev gave a cagey smile.

“You’ll see on Saturday,” he said.