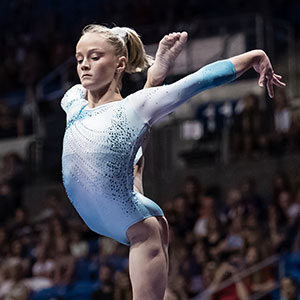 When Riley McCusker got the call to compete at this weekend’s AT&T American Cup two days ago, she didn’t have far to travel.

The 15-year-old hails from Brielle, a scenic town on New Jersey’s Manasquan River just an hour’s drive away from Newark’s Prudential Center, where the season’s first international all-around World Cup is being held for the second straight year.

“My gosh, this is just so special,” McCusker said after her first podium training session this Thursday. “It’s my first international meet ever, in my hometown, so my friends and family are all coming. I just love having all that love and support.”

Parents Tom and Jessica, along with Riley’s three siblings, grandparents and a gaggle of cousins, will form their own cheering section. So will McCusker’s teammates at MG Elite, where the budding star trains under head coach Maggie Haney.

“They got off of practice, which is pretty cool,” she said. “I love having them here. It adds more support and makes me feel more calm.”

A year ago, the bubbly teenager could only dream about competing at American Cup, an event that’s been won by the likes of “Final Five” Olympians Gabby Douglas (2016) and Simone Biles (2015), not to mention Jordyn Wieber, Shawn Johnson and Nastia Liukin. But since joining MG Elite in the fall of 2015, her rise has been nothing short of phenomenal.

“I didn’t even qualify as elite this time last year, so it’s incredible how far I’ve come,” McCusker said. “When I walked into MG, I did not have any of my bar skills. Maggie has helped me come as far as I’ve come today.”

“Riley came in September (2015), and I just started teaching her everything I could,” Haney said. “She had literally none of the requirements whatsoever. She had a lot to learn, but obviously she worked hard in the gym every day.”

“I have 30 kids on my entire team,” Haney said. “We strive for flexibility, really great artistry and really great dance. We work hard to keep the group super small, and I try never to miss a tumble the kids take. That’s all you need to know.”

It all came together at the 2016 P&G Gymnastics Championships in St. Louis, Mo., where McCusker nailed her routines to place second in the junior all-around.

“She had no goal, no expectation, no idea of where she would end up, and she was second in the country, which is pretty crazy,” Haney said. “That was her first time on podium. This competition will only be her third time on podium, ever.” 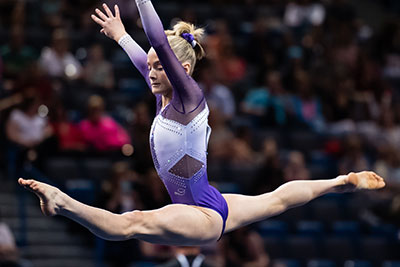 “Riley finished first in verification, which was really great,” Haney said. “I think basically we’ve been going step-by-step, following the process that I know works. A year and a half ago, actually a year ago, she was not an elite gymnast. She did not qualify as elite until March of last year, so it’s kind of crazy when you think about it like that.”

Both athlete and coach are treating this event as a chance to gain exposure and try out new skills and routines.

“She is doing her Yurchenko double full (vault) for the first time,” Haney said. “Last year was her first time competing a full, this year she is doing a double. We tried it in training today. That will be a good upgrade. On beam and bars, we’ve upgraded her routines by almost a point each, which is a big jump.”

McCusker will also perform a new floor routine, one chosen by Haney to fit her student’s sunny demeanor.

“I’m really excited about it, because it’s like a sassy ballet,” McCusker said. “I think it definitely shows my personality.”

“I choreograph for all of my kids, and I try to find what fits them,” Haney said. “I look at the body type and what they can pull off. Once you get to know an athlete, you want to fit their personality. So it’s a ballet, but we added some spice to it.”

As successful as McCusker has been thus far, Haney firmly believes far bigger things are in the offing, perhaps even the 2020 Olympic Games in Tokyo.

“Riley has a really beautiful international look about her gymnastics,” the coach said. “She’s super flexible, with long lines and really nice artistry, so I think that goes a long way.

All that, though, is far away. Right now, McCusker is just living the dream, getting ready for her first senior event on one of the world’s biggest stages. She and U.S. teammate Ragan Smith will square off against a strong international field featuring Amy Tinkler of Great Britain, bronze medalist on floor in Rio, and Japan’s Asuka Teramoto, who was eighth in Rio’s all-around.

A moment later, she added, “I noticed it was also Simone (Bile’s) first international meet, after the (London) Olympics, so . . . I’m moving in the right direction.”