This coming weekend when collegiate powerhouses Oklahoma and Stanford go head-to-head in a duel meet, the teams will be missing the two top gymnasts on the college scene.

That’s because Yul Moldauer of Oklahoma, and Stanford’s Akash Modi will be representing another team – Team USA – at the AT&T American Cup in Newark, N.J., the first all-around World Cup event of the 2017 season.

“We were kind of joking that the American Cup was going to be a preview of the college event later that night,” Modi, 21, told USA Gymnastics. “Whoever wins American Cup, that team is favored. (Laughs.) It’s awesome for two current NCAA athletes to be competing at American Cup and showing what high-level college gymnastics is like.”

Moldauer and Modi are the best of the best when it comes to collegiate gymnastics, having won respective individual all around titles in the past two seasons. Last year, Modi was named as an alternate for the Olympic team, making the trip to Rio.

But this coming weekend at Prudential Center they both go from who’s-coming-up status to leading men on the U.S. gymnastics scene. It was Moldauer who won the Winter Cup two weeks ago, securing his spot at the AT&T American Cup. Modi, who was second there, got the nod to go to American Cup after four-time national champion and two-time Olympian Sam Mikulak tore his left Achilles during a floor routine. Mikulak had been named to the AT&T American Cup team prior.

“The thing that happened with Sam was very sad,” said Moldauer, who is 19. “I’ve always been a big fan of his. Akash and I are the young dogs in the U.S. program. We have grown up together, so it’s going to be really fun to go into something as big as this together. For me, this is a chance to start bigger things in my own gymnastics career.”

While Modi is two years older than Moldauer, the pair has known each other for years. They met when Modi was 14 and Moldauer was 12 and have been friends and competitors ever since, including at their current training bases of Stanford and Oklahoma.

“Every training camp, we see what each other is doing and that pushes us,” Modi said.

“We’ve grown up together,” Moldauer echoed. “I feel like he’s the bigger dog in the ring. He’s been giving me advice. Akash is taking more of that team captain character, and it’s always nice to have someone you look up to who is also going through some of the same things as you.”

Regular fans of gymnastics will no doubt recognize both Modi and Moldauer’s names, but on the international stage, competing at the AT&T American Cup signals their arrival at the forefront of U.S. men’s gymnastics. The meet includes Olympic all-around silver medalist Oleg Verniaiev (American Cup champ, 2015), as well as team gold medalist Ryohei Kato, the American Cup defending champion, and Switzerland’s Eddy Yusof (12th in the Rio all around). 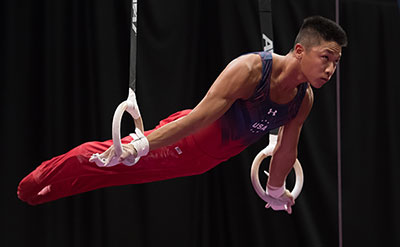 China’s Sun Wei, who won gold at the Rio Test Event on the pommel horse, is also in the field, one that will challenge the American newcomers to check their games against some of the best in the world.

“I try not to focus on the result,” he continued. “I try to work in the gym day in and day out. I want to do what I do in practice in the competition. I do think I have the potential to be near the top.”

It will be a homecoming of sorts for Modi, who grew up not far from Newark in New Jersey and said he’s been an American Cup fan as it often swings through the area. He was in attendance at Madison Square Garden in New York City as Hamm and Nastia Liukin won titles in 2008, but also watched as his cousin, Raj Bhavsar, competed.

“This is the most prestigious competition in the U.S.,” Modi explained. “For me to be able to represent my country at it, it’s basically the coolest thing I could have had happen to me.”

Both Modi and Moldauer also see it as a first step to the 2020 Olympics in Tokyo and their chance to make the U.S. team. While Mikulak is temporarily out with injury, much of the Rio squad – Dalton, Chris Brooks, Alex Naddour – has continued to train. What will shape out among the American men this quad is anyone’s guess.

“I hope this is the start to my Olympic career,” said Moldauer, who trains under Mark Williams, the Oklahoma coach who led the U.S. men in Rio. “I always dreamed of going to the Olympics when I was younger. Hopefully, I can get out my name to people in other countries and to fans in the U.S.”

“Knowing I was so close and I could do it… that sits in my mind that this wasn’t just a hope, it’s a ‘I can and next time I will,'” Modi explained of his experience as an Olympic alternate. “I have already sat down with my coach and we’ve talked about my four-year plan. I’m doing everything I can to be on that 2020 team.”

The focus this weekend is the AT&T American Cup, however, a meet both guys hope is that first step in the long road to 2020. And for now, they’re striding along side-by-side, both competitors and teammates at the same time.

“We’ve been able to push each other to get better,” Modi said of their heathy rivalry through the years. “We take it upon each other to beat one another. Seeing Yul in the gym just makes me want to work harder.”