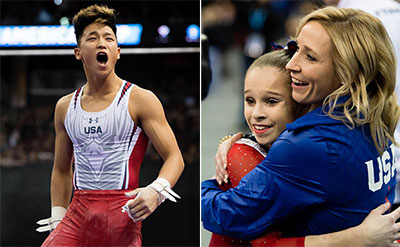 On competing with Akash Modi while their college teams are facing off against each other tonight:
“We set that aside. Akash is a great guy. We had a lot of fun, we roomed together and we trained together, we cracked jokes together. It was nice rotating with him throughout the meet. We made each other relax when we got nervous, so it was great.”

On his best routine of the day:
“I’d say it was either high bar or pommel horse. High bar I’ve been struggling a little bit and then pommel horse I feel like I swung pretty good today and I haven’t felt that good in a while.”

On today’s performance:
“Everything wasn’t perfect. It wasn’t exactly how I wanted it to be but I stuck with it through some bad parts and did exactly what I wanted to do.”

On his best performance today:
“Definitely parallel bars. I love that routine, it’s one of my favorites. It’s one of the ones I pride myself on my ability to do, and I really showed off the best of my ability.”

On becoming American Cup Champion:
“It’s amazing to add my name to that list especially since my coach [Kim Zmeskal] did it also. Now she has a gymnast who has done it with her.”

On her best routine of the day:
“I’m proud of my bar routine that I did today. I thought it was really clean.”

On today’s performance:
“It definitely wasn’t the best and it wasn’t what I’ve been doing in practice,” she said. “I had jitters here and there. . . I know I will do much better next time.”