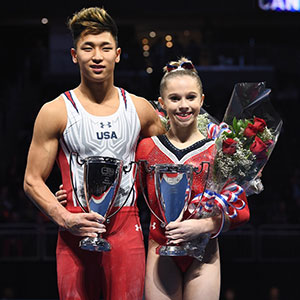 Ragan Smith and Yul Moldauer solidified their prospects as future leaders of Team USA by taking top honors at the AT&T American Cup at Newark, N.J.’s Prudential Center on Saturday.

Smith’s triumph extends the U.S. women’s winning streak in the event to 15 years, while Moldauer’s win is the first for a U.S. man since Sam Mikulak’s in 2014.

“I didn’t really think about (the streak),” Smith said. “I don’t think about winning, or placing on the podium. I just think about my gymnastics, and that’s why the results came today.”

Smith led the nine-member international field throughout the afternoon, gaining the competition’s highest scores on vault – she did a Yurchenko double full — and floor, where her popular Addam’s Family routine was a hit with the crowd and earned 14.000.

“I really like this routine, I can connect to the crowd and stuff,” the 16-year-old from Lewisville, Texas, said. “I feel like the crowd connects to me, they clap and they snap, and I really like that a lot.”

There were a few rough spots, including a fall off of the balance beam on a standing full (back flip with a full twist). But Smith recovered to execute a double pike dismount with just a small hop on the landing, and earned a 13.266 to place third on the apparatus. She ended with 56.099 points total in the all-around.

“I lost focus, it was just off,” she said of the fall. “Whenever you have a mistake, you have to brush it off your back and pretend it never happened. You can still keep your events together.”

Kim Zmeskal-Burdette, who coaches Smith at Texas Dreams Gymnastics, was glad to see her athlete stay calm and carry on.

“Obviously, no one wants to have a fall, but I’m very proud of her,” Zmeskal-Burdette said. “She’s never been in this leadership position before, and mistakes will happen. The most important thing is, can you turn the page and continue?”

It’s been a busy last eight months for Smith, who was named an alternate to the Rio Olympic team after placing fifth in the all-around at the U.S. Olympic trials and impressing officials at the subsequent training camp. She traveled with the team and trained in Rio, but after returning to the U.S. was troubled by a bone chip in her ankle and had surgery to remove it in October.

“After this, we’re taking some actual down time, to get back to basics,” Zmeskal-Burdette said. “As Valeri (Liukin, the national team coordinator) said, Ragan she hasn’t really had time to do skills. So, she’s not planning on going to the other meets the rest of the team is going to in the next month or so. Her next event will be the Classic in July. We’re looking to make some significant improvements.”

It was a disappointing afternoon for Riley McCusker, who settled for fifth place and a total score of 52.966 after slipping off of the uneven bars on a release move, and missing her foot on a back handspring leading to her beam dismount.

The 16-year-old from MG Elite lives in nearby Brielle, N.J., and had a large rooting section of friends, family and teammates in the crowd. She admitted that may have added a bit of pressure.

“It definitely wasn’t the best, and it wasn’t what I’ve been doing in practice,” she said. “I just wasn’t paying attention to my routines, a little bit. I had jitters here and there… I know I will do much better next time.”

This event is often thought of as a showcase for U.S. women, especially in recent years. But Moldauer and Akash Modi, the Rio Olympic alternate who placed third, nearly stole the show on Saturday.

“This event just puts more experience behind me,” Moldauer, a 19-year-old NCAA standout from the University of Oklahoma, said. “It helps prove I can go up for bigger events, and that the U.S. is still in the running.”

Moldauer was first in floor with 14.566, but his signature moment came in the last rotation, his high bar routine. The entire arena, including fans, fellow gymnasts and coaches, knew a solid score would give him the win, and all watched intently in near silence. Moldauer responded with a high-flying Kovacs (double back somersault) over the bar that gained cheers, particularly from his teammate Modi. His 85.931 total gave him the title by .232.

“That was one of best high bar sets I did this season, and it was good to do it now under the pressure,” Moldauer said. “It was a very special routine, I think.”

“It was great, (Kovacs) is one of those exciting release moves the crowd loves to see,” Taqiy Abdullah-Simmons, the assistant coach for the Oklahoma men’s gymnastics program, said. “He also had a big stick on the dismount, which always makes it a lot more exciting.”
Perfectionist he is, Moldauer has a laundry list of items he’d like to improve.

“On the floor, I definitely need to stick my landings,” he said. “For pommel horse, it’s always working on that circle, the tiniest details, locked elbows, positions. Vault, it’s landing with your feet together. For parallel bars, it’s hit the handstands and stick the dismounts.”

“Yul hits better landings in practice than he did on floor today,” Abdullah-Simmons said. “On high bar, he can improve the angles on his turning elements. If he does those two things, he will be able to score a point higher in the all- around.”

Moldauer battled Ukraine’s Oleg Verniaiev, a parallel bars gold and all-around silver medalist in Rio, throughout the six rotations. Verniaiev earned top scores in three events – pommel horse, rings and parallel bars – but lost ground with a.400 neutral (out of bounds) deduction on his floor routine and had to settle for second place.

Modi, a Stanford University standout who regularly battles Moldauer at collegiate events, was almost as pleased with today’s results as his rival.

“I’m beyond excited for Yul,” he said. “It shows a good future for USA Gymnastics. It’s great to see American men back on top at the AT&T American Cup.”

The 21-year-old mechanical engineering student cited his parallel bar routine, which tied Verniaiev for high score with a 15.033, as one of his best ever.

“I take pride in that routine, I feel I like I have it down and I can do everything in it better than anyone else in the world,” he said. “I think I showed that today, I did a solid routine and stuck the dismount. I’m just happy that I finally get one routine that went exactly the way I wanted it.”

The NCAA Championship, held in West Point, N.Y., the third week of April, will feature another Moldauer-Modi face-off. Modi gained the all-around title in 2015; Moldauer won it last year.

“Oh, it will be battle,” Modi promised. “We will meet again.”