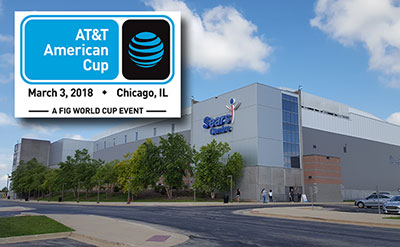 “We are excited to have the AT&T American Cup return to the Sears Centre Arena next year,” said Ron Galimore, chief operating officer of USA Gymnastics. “Our Chicagoland members and fans are enthusiastic and engaged. In 2009, they turned out in force for the event despite a blizzard. Next year, we will offer a weekend of gymnastics that spans from many of the best gymnasts in the world to our country’s rising stars in men’s and women’s gymnastics. We look forward to seeing everyone back here in March.”

Also held at the Sears Centre Arena in 2009, the AT&T American Cup showcases many of the world’s best gymnasts, in a one-day, all-around competition March 3 at 10:30 a.m. CT. On March 2, the Nastia Liukin Cup that features some of the USA’s top Junior Olympic female gymnasts kicks off the big weekend at 7 p.m. CT. The Elite Team Cup, a team event with many of the USA’s top junior men, wraps up the weekend’s events on Saturday evening at 5 p.m. CT.

Elite Team Cup
In its third year, the Elite Team Cup features nine men’s Regional Teams. The country’s best junior elite male gymnasts compete, representing their respective regions. The junior elite gymnasts must be between 13-18 years of age as of Sept. 1, 2017, and will be selected from the Regional Elite Team Program. The Junior Elite gymnasts will follow the USA Gymnastics/International Gymnastics Federation competition rules. The event was first held in 2016 in Newark, which also hosted the 2017 edition.