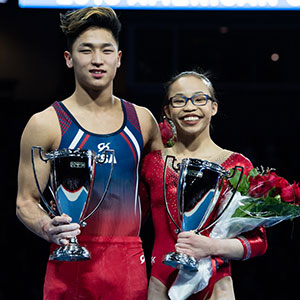 In the first rotation, Hurd earned 14.566 points for her double twisting Yurchenko vault. On uneven bars, she swung a routine featuring an in-bar Shaposhnikova, stalder Tkatchev to Pak salto, and in-bar full connected to a full-twisting double back dismount (14.200). Hurd posted a 13.800 on balance beam for her routine highlighted by a standing full and a full-twisting double pike dismount. She solidified her all-around victory on floor with a routine that included a tucked double-twisting double back for her first pass and a double pike dismount (14.033).

Japan’s Mai Murakami placed second at 55.633. Murakami’s double-twisting Yurchenko garnered a 14.600 to tie with O’Keefe for the lead after one rotation. She went to the uneven bars, where she performed a toe on Shaposhnikova to an in-bar Gienger and dismounted with a full-twisting double back (13.400). In the third rotation, Murakami’s performed a front pike, back handspring layout step out series and a double pike dismount on the balance beam, scoring a 13.600. She concluded her competition on the floor exercise where she secured her second-place finish with a 14.033.

In her senior debut, O’Keefe, a two-time U.S. junior all-around champion, finished third in the American Cup with a 54.365 total. She tied for lead after the first rotation, earning a 14.600 for her Yurchenko double. O’Keefe had an uncharacteristic mistake on the uneven bars when she clipped her foot on a piked Jaeger. She finished the routine strong with an Arabian double front dismount for a 13.233. On balance beam, O’Keefe posted a 13.066 after falling on her double wolf turn. She closed out her competition with 13.466 on the floor, tumbling an Arabian double front to a stag jump to open her routine and dismounting with a double pike.

Moldauer, who is the reigning World floor bronze medalist, performed a solid routine highlighted by an Arabian double front half-out mount and clean triple-twist dismount to earn a 14.666, the second highest floor score. He jumped to the top of standings after earning a 14.066 for his pommel horse routine that included a flair sequence, scissors to handstand and clean one pommel work. On rings, he executed a Maltese, Azarian cross, kip to Maltese, tuck and pike Yamawakis, and a double-twisting double back dismount for a 14.333. Moldauer moved to vault where he garnered a 14.733 for his Kasamatsu one-and-a-half. He capped off a solid performance on parallel bars with a double front half out dismount (14.500). On high bar, Moldauer clinched the title with a 13.666, complete with his stuck full-twisting double layout dismount.

Great Britain’s James Hall opened his competition with a 13.766 on floor exercise after tumbling a tucked double double and dismounting with a triple full. He posted the event’s top pommel horse score at 14.166. Hall capped off his still rings routine with a tucked double-twisting double back dismount, scoring a 14.033. He vaulted a one-and-a-half Kasamatsu to earn 14.333, followed by a 13.133 on parallel bars with a tucked double back dismount. Hall’s 13.866 on the horizontal bar secured his second place finish.

USA’s Allan Bower placed fifth. He started his meet with a clean floor routine that included piked double front and tucked double-twisting double back for a 13.333. He moved to pommel horse, showing one pommel spindles, Magyar, Sivado to score a 13.966. Bower tallied a 13.400 on still rings for his routine with a Maltese, Azarian cross, kip to Maltese and tucked double-twisting double back dismount. He earned a 14.533 for his Kasamatsu one-and a-half on vault. In the fourth rotation, Bower took to the parallel bars where he dismounted with a double pike for a 13.766. Bower ended his day on the high bar where his routine included a Kovacs and half-in half-out dismount for a 12.866

Invitations to compete in the 2018 American Cup, which became a FIG all-around World Cup event in 2011, were based on team results from the 2016 Olympic Games in Rio de Janeiro, Brazil. The other World Cup events in the all-around series are in Stuttgart, Germany, March 17-18; Birmingham, Great Britain, March 21-22; and Tokyo, April 14.