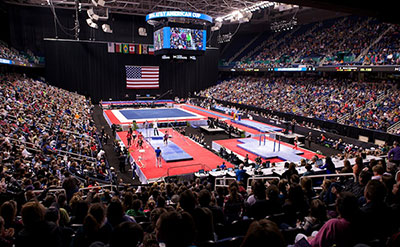 GREENSBORO, N.C., April 25, 2018 – The American Cup, the USA’s most prestigious international invitational and part of the International Gymnastics Federation’s all-around World Cup series, returns to the Greensboro (N.C.) Coliseum Complex on March 2, 2019, at 11:30 a.m. ET. The American Cup, which was held in Greensboro in 2014, is the anchor of a week that includes four gymnastics events. In addition to the American Cup, the Triple Cup weekend includes the Nastia Liukin Cup on March 1 at 7 p.m. and the men’s Elite Team Cup at 6 p.m. on March 2. The Greensboro Coliseum Complex is also hosting the 2019 Greensboro Gymnastics Invitational Feb. 27-March 3, turning the city into “gymnastics central.”

Tickets for the Triple Cup weekend are expected to go on sale this summer.