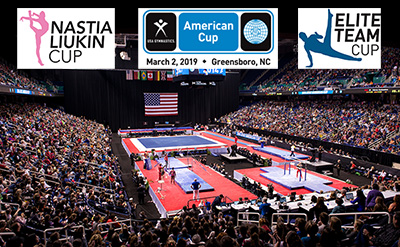 GREENSBORO, N.C., Oct. 1, 2018 – All-session tickets go on sale today for gymnastics’ Triple Cup weekend that is anchored by the 2019 American Cup, the USA’s most prestigious international invitational and part of the International Gymnastics Federation’s all-around World Cup series. Held at the Greensboro (N.C.) Coliseum Complex, the American Cup is March 2, 2019, at 11:30 a.m. ET, with the Nastia Liukin Cup on March 1 at 7 p.m. and the men’s Elite Team Cup at 6 p.m. on March 2.

All-session ticket packages range in price from $89-$149, plus applicable fees, and include tickets to all three of the weekend’s events. Ticket prices vary according to seat location. To purchase tickets, call Ticketmaster’s charge-by-phone line at 800-745-3000 or visit ticketmaster.com or the Greensboro Coliseum Complex Box Office. Group tickets may be purchased by calling 336.373.7433. Discounted tickets are available through gymnastics clubs participating in the gym club ticket program. For more information, go to americancup.com.